Brewers’ Pale Ale is an evolving hop series, yet it remains a crisp and quaffable American Pale Ale packed with hop aroma and flavor.

Anchor’s Brewmaster, Scott Ungermann, asked our brewers “what beer would you like to drink right now?” and they told him “a killer, everyday pale ale that’s aromatic, crisp, refreshing and flavorful”. And then, they set off to make it.

Our brewers work together to develop and constantly evolve recipes until they’re absolutely delicious and uniquely Anchor. For this beer, their first step was to find just the right malt bill to showcase their favorite hops and then blend those hops within that framework. While it took many iterations and taste tests, our brewers were up for the challenge! The result? A modern American Pale Ale with the fresh aromatics of an ever-changing blend of our brewers’ favorite hops for a bright, crisp, delicious and perfect go-to beer.

Brewers’ Pale Ale Galaxy Hop Blend is a crisp, easy-drinking pale ale with accentuated tropical fruit aromatics due to the Galaxy hop’s cosmic amount of essential oils – the highest percentage in the industry. The first version of Brewers’ Pale Ale highlighted the unique Nelson Sauvin hop from New Zealand, while the second iteration used the Citra hop from Washington state. In the third adaptation of Brewers’ Pale Ale, Anchor brewers returned to the Southern Hemisphere, the only place where the Galaxy hop is grown. Our team of brewers will continue to experiment with their favorite hop varieties in the Brewers’ Pale Ale series. The malt, alcohol, bitterness and brewing process stay consistent, but each new blend showcases flavors and aromatics that are unique to the selected hop varietal.

Brewers’ Pale Ale is brewed with 2-row pale, red wheat and pilsner malt. The Galaxy hop blend pours a bright golden straw color with a creamy white head and nice lacing. Not filtered to intense clarity, it has an intentional slight haziness. It finishes fairly dry with a nice balanced drinkability, making it a beer to enjoy any time of the day.

Brewers’ Pale Ale, isn’t just another beer—it’s a beer that’s brewed by brewers, for brewers. And now, we’re proud to share it with our beer community. Cheers! 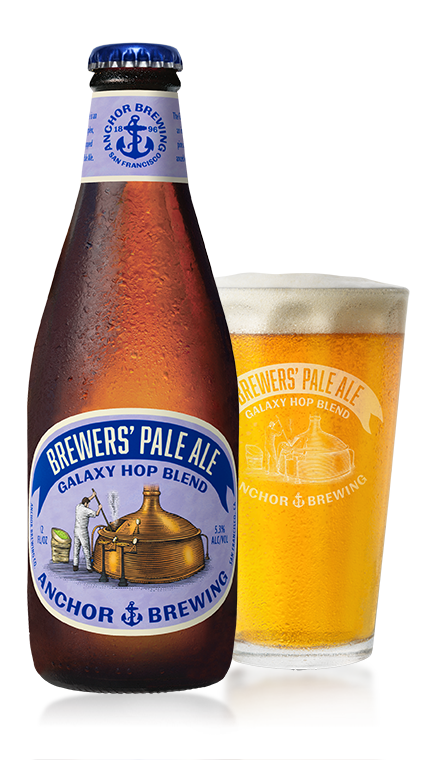