Named after a San Francisco sailing legend from a time when stouts were first exported to the West Coast. Our stout is a dry, Irish-style export stout akin to those brewed in the 1800s for the long voyage to San Francisco. Black as night, this high-gravity, malty brew offers intense but well-balanced flavors and aroma, with hints of dark chocolate and roasted coffee.

The arrival of a clipper ship in gold-rush San Francisco brought mail and news of "the States," would-be miners and entrepreneurs, boots, shovels, pickaxes, butter from New York, cigars from Havana, and stout from as far away as London and Dublin.

The stouts that San Franciscans imbibed in those days were no ordinary ales. They were export Stouts —dark, intense, high-gravity brews created especially to survive a long voyage like those around Cape Horn.

It took the average clipper three to four months to sail from New York to San Francisco. But not the Flying Cloud, which, in 1851, made the trip in 89 days and 21 hours anchor to anchor. With the exception of its own 89 day and 8 hour voyage three years later, its record remained unbroken until 1989. Thanks to this clipper’s "extreme" design and the savvy of its captain, Josiah Creesy, and his wife and navigator Eleanor, the Flying Cloud quickly became a San Francisco sailing legend. We celebrate it and a legendary craft brewing tradition with our Flying Cloud San Francisco Stout. 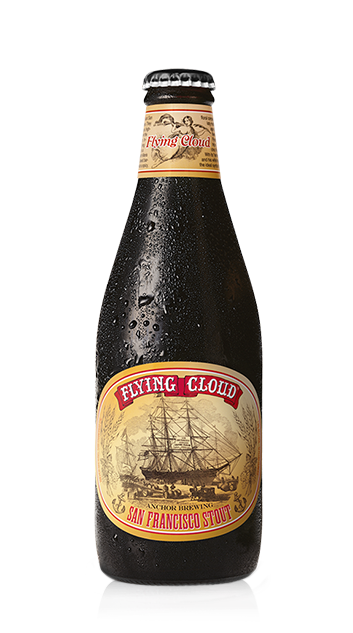