Anchor Steam® Beer's roots date back to the sundry and mysterious adaptations and improvisations of brewers to the primitive conditions they faced during the California gold rush, long before icehouses and modern refrigeration made traditional lager beer a viable California option.

Early efforts notwithstanding, it wasn’t until the winter of 1875/76 that a California brewer was able to create—thanks in part to the ready availability of ice in the mountains near Truckee—the first true California lager.

The inaugural brew of the Anchor Brewing Zymaster™ Series is our attempt to re-create such a beer. Brewed from the finest California two-row barley, Cluster hops (the premier hop variety in 19th-century America), our own lager yeast, and mountain water. This fresh take on a classic California brew is, quite simply, re-discovered gold.

Brewed with San Francisco tap water, fresh from Yosemite, and fermented with our own special strain of lager yeast, our California Lager is kräusened in the traditional manner and lagered in our cellars. The result is a uniquely sessionable lager beer, which is maltier, hoppier, and somewhat stronger than modern American lagers. 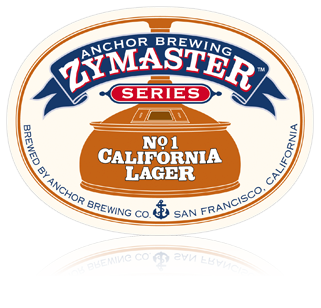