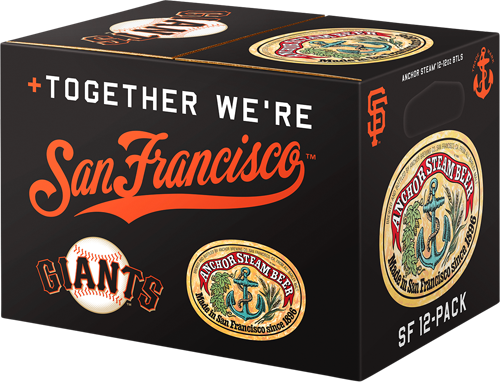 In recent years, Anchor Brewing has partnered with the two-time World Series Champion, San Francisco Giants. Together these iconic San Francisco institutions created the Anchor Plaza and Taproom at AT&T Park which serves Anchor Steam®, Liberty Ale®, and more alongside Anchor’s latest introduction, Anchor California Lager®. The partnership was recently renewed through the 2017 season and expanded to include the introduction of an Anchor Brewing suite experience at AT&T Park as well as the Anchor Corral at Scottsdale Stadium, the Spring Training home of the Giants.

In celebration of the SF Giants’ 2013 season and our longstanding partnership, Anchor Brewing has released a limited edition Anchor Steam 12-Pack with specially designed packaging. The commemorative pack features the team’s colors and logos along with the brews and baseball history notes printed on an interior flap. Fans can cut along the sides of the box for instant signs to cheer on their team during games. Lift the pack and fans will find the Giants game schedule printed on the underside.

This limited edition SF Giants 12-pack is available now and throughout the season while supplies last at major grocery outlets; including: Safeway, Lucky Save Mart, Bevmo, Molly Stones and Raley’s Grocery throughout Northern California, Nevada, southern Oregon, and Hawaii.

Anchor Brewing’s video tribute to San Francisco’s rich brewing history and baseball tradition can be viewed by visiting http://www.youtube.com/anchorbrewing. A shortened version of the video will also be shown to fans at select Giants home games throughout the 2013 season.