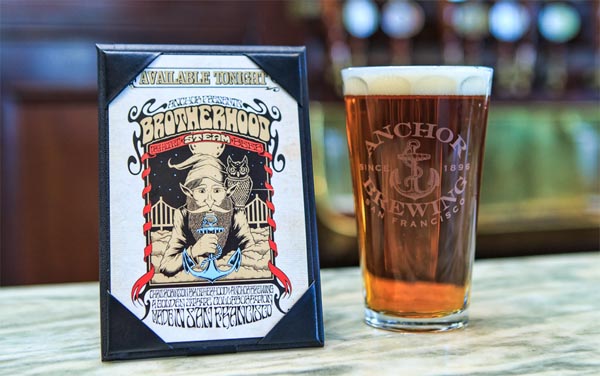 A collaboration between the iconic brewery and band, Brotherhood Steam Beer is a celebration of originality and craftsmanship, bringing together handcrafted California brews and California tunes.

“At Anchor, we’ve always welcomed not only our friends to the brewery, but pioneers, artists and intellects who were often intrigued by the blend of art and science that is our brewing tradition,” said Brewmaster Mark Carpenter, “and, we often found ourselves equally intrigued by them. In the case of the CRB, a passion for music and a chance meeting evolved into a friendship, a collective exchange and the creation of Brotherhood Steam Beer.”

A time-honored tradition for English breweries is to designate their beers as “Ordinary”, “Best”, “Special”, and “Extra Special Bitter” to note beers of increasing strength. Brotherhood Steam Beer (5.6% ABV) is an “Extra Special Lager” (ESL) – aka “The Gig Beer” – meant to be an easy drinking brew from the first set to encore.

"We are over the moon that our collaboration with Anchor Brewing has brought us into the world of craft beers and couldn't be more excited to bring this Golden State collaboration to a broader national audience,” said Chris Robinson. We hope those able to indulge in the Brotherhood Steam Beer share in our experience of the good times to be had with a stellar beer in hand and the cosmic vibes of the CRB in the air."

Inspired by CRB’s song-craft and the brew-craft of our flagship, Anchor Steam ® Beer, Brotherhood Steam Beer is a unique blend of pale and caramel malts and dry-hopping with Citra and Nelson Sauvin hops. The result is a copper color brew with aromatic hints of citrus and mint, a smooth, full-bodied malt flavor with a lingering, fresh hop finish.

The artwork for Brotherhood Steam Beer was created by San Francisco-based artist Alan Forbes, who specializes in rock music posters and has been collaborating with Chris Robinson for over 20 years. Brotherhood Steam Beer will be proudly served at the below select venues during the final dates of the Chris Robinson Brotherhood 2014 Tour:

To learn more about the Chris Robinson Brotherhood, visit www.ChrisRobinsonBrotherhood.com.

Momentarily content with dusting the globe and turning the sun out at its scattered dances, the Brotherhood reconvened with producer Thom Monahan (Vetiver, Devendra Banhart, Papercuts) to materialize a new set of sounds unseen to lean on ceilings, a music of the spheres not content to just envelop rafters. The writing partnership and dialogue between Robinson and Casal has never been as closely woven as it is on PHOSPHORESCENT HARVEST, almost akin to the conversation you hear murmuring out of the mouths of the moon and the stars as they glide the celestial track. This isn't a range they ride alone though, and as strong as the songwriting gets does too the rest of the band's willingness to seek company in chaos' warm embrace, discovering that in familiar forms there can glow a vastness.

PHOSPHORESCENT HARVEST features ten new songs that build on the California group's impressively growing repertoire by combining the direct and immediate songwriting Robinson has long been known for with an expansive sense of space and texture that has never been so fully realized until now. In an age when so many put their beliefs in trends, the volumes have all collapsed and rooms are filled with tiny rock and dampened lamps, the Chris Robinson Brotherhood rolls on to sharpen the blur at your brow and wind like smoke through your mind.