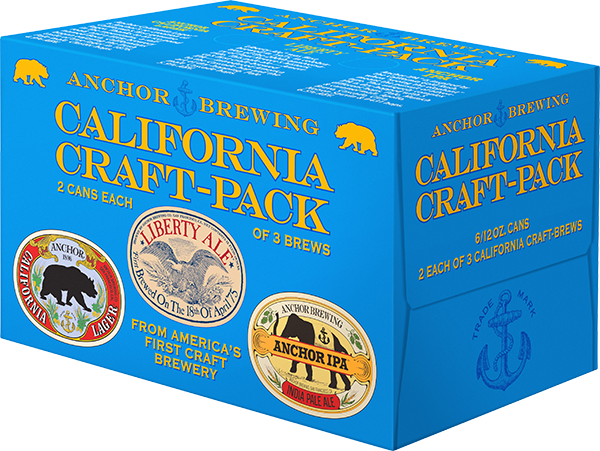 Designed for beer fans to sample three legendary brews from America’s first craft brewery, the California Craft-Pack brings Anchor favorites together in one convenient offering, including a commemorative can of Liberty Ale, available for a limited time to celebrate the 40th anniversary of the beer.

The California Craft-Pack is the first mixed pack of cans from the iconic San Francisco brewery. In August 2013, Anchor Brewing launched a limited release of Anchor Craft Originals; a mixed 12-pack featuring a variety of bottled brews including Anchor Steam® Beer, Anchor Porter®, Liberty Ale®, and Original Wheat™. For the first time in nearly 120 years of operation, Anchor began canning beer in 2014 starting with Anchor California Lager. Due to popular demand, additional Anchor beers including Anchor IPA and Anchor Summer Wheat have hit shelves in cans. Now, beer fans will get to enjoy some of their favorite Anchor cans in one 6-pack, released in time to accompany summer’s outdoor adventures.

“The success of our canned beers over the last year has been tremendous,” said Anchor Brewing CEO and President Keith Greggor. “We’re thrilled to now offer some of our most beloved beers in the California Craft-Pack, which is a nod to our brewing roots that date back to the California Gold Rush. The variety pack is perfect for easy summertime entertaining or a convenient sampling among friends. Whether you’re an IPA lover, a lager lover, or somewhere in between, the Craft-Pack has a beer for everyone -- assuming sharing is an option!”

The California Craft-Pack will be available nationwide starting in July at select retailers and at Anchor Brewing in San Francisco. Find a pack near you using the Anchor Beer Finder.

Learn more about the California Craft-Pack by visiting www.AnchorBrewing.com.