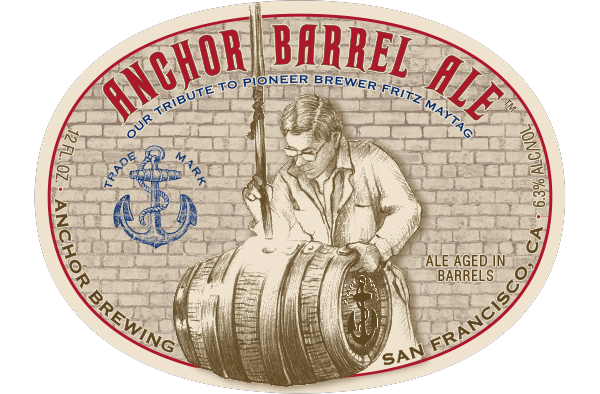 “Anchor Barrel Ale is a welcome departure from the norm of barrel aged beers,” said Anchor Brewmaster Mark Carpenter. “We took four well-loved Anchor beers and aged them separately in our used Old Potrero® Whiskey barrels. The beers don’t undergo fermentation, though, so the aging process focuses on picking up flavors and aromas from the barrels. Next we blended the aged beers in a cellar tank with charred barrel staves for a secondary fermentation, allowing the beer to naturally carbonate, pick up characteristics from the staves, and let the flavors marry. The result is a robust dark beer with a gentle whiskey note and flavors of charred oak and burnt caramel that’s remarkably smooth. The brewers at Anchor had a great deal of fun developing and brewing this beer, and we hope Anchor fans enjoy it as much as we do.”

Anchor Barrel Ale (7.5% ABV) was brewed as a tribute to pioneer brewer, distiller, and visionary Fritz Maytag. In 1965—at twenty-seven years old—he rescued America’s smallest, most traditional brewery from closure, igniting a revolution in craft brewing that continues today. With the founding of Anchor Distilling in 1993, Fritz blazed a new trail toward the creation of craft-distilled whiskeys and gins. The Anchor Argonaut Collection honors that pioneering spirit with unique and daring beers, available for a limited time in 4-packs. Anchor Barrel Ale joins Flying Cloud Stout™ (7.4% ABV) and Double Liberty IPA™ (8.2% ABV) as the third brew in the Argonaut Collection.

Aged in used Old Potrero® Whiskey barrels and on their charred staves, this full-flavored beer delivers a rich complexity with whiskey notes and woody aromas that are well balanced by its coffee, toffee, and roasted malt flavors. Anchor Barrel Ale is a blend of beloved Anchor ales, each aged separately before combined. The intricate aging process and harmonious blend of Anchor beers results in a full-bodied brew with subtle charred oak flavors and a remarkably smooth finish.

Anchor Barrel Ale is available now nationwide in 4-packs and on draught for a limited time as well as on tap at the Anchor Brewing Taproom and the Anchor Beer Garden at The Yard in San Francisco. Find a brew near you using the Anchor Beer Finder.

The Anchor Argonaut Collection marks the first time since 1971 that Anchor has released an Anchor beer in a 4-pack. To honor the spirit of adventure, The Argonaut Collection will showcase adventurous new brews for a limited time, starting with the release of Flying Cloud San Francisco Stout™ followed by Double Liberty™ IPA and now Anchor Barrel Ale™.