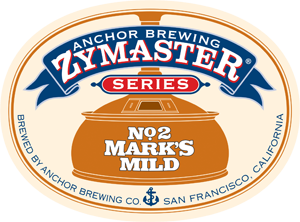 “Everyone was having bitter except one guy who was having mild,” said Mark. “I thought it would be fun to try something different. It was love at first pint.”

Mark’s Mild (4.0% ABV) is Anchor Brewmaster Mark Carpenter’s interpretation of a traditional English dark mild. It is made from a single-temperature mash of English Maris Otter pale malt and crystal malts, a single addition of English Goldings hops to the boil, invert sugar, and our own ale yeast in an open fermenter. Mark’s Mild is a rich chocolate-brown color with luscious malty sweetness and hints of chocolate, nuts, caramel, and toffee. Neither heavy, bitter, nor high in alcohol, it has a smooth, thirst-quenching finish that makes Mark’s Mild the ultimate sociable craft beer.

The origins of mild date back 500 years to the days when the English distinguished between unhopped present-use “ales,” meant to be consumed within days or weeks of brewing, and hopped “keeping beers,” often aged for a month or more. As hops gained acceptance, lightly hopped present-use ales became known as “milds.” Milds can be weak or strong, pale or dark. The term refers to flavor and indicates an ale accented towards lightly nutty maltiness rather than hoppy dryness or bitterness. Thirst quenching and sessionable, milds were popular with the English working class, particularly in the West midlands and the Northwest. By the time our brewmaster Mark Carpenter had his first mild, this traditional style was already in decline, supplanted by bitter and lager. According to some mild-ale beer experts, today’s mild accounts for a small fraction of the world’s beer production, but in the historical sense, mild accounts for nearly every beer served in the world. Almost categorically, modern beer is served young, without the lactic sourness that was the hallmark of the aged beers of the past.

Available in draught only, Mark’s Mild will be poured in select bars and restaurants throughout the United States, as well as the Anchor Taproom, starting Tuesday, July 17th.

Zymaster is a new word coined by Anchor Brewing to describe a brewmaster with hands-on experience throughout the a-to-z process of creating a new beer, from the research and selection of the raw materials and development of a recipe to brewing, fermentation, cellaring, and finishing. Mark’s Mild is the second beer in our Zymaster Series, a unique series of American craft beers from Anchor Brewing, rooted in its exceptional respect for the ancient art and noble traditions of brewing, featuring extraordinary ingredients, innovative techniques, and unusual flavors. Zymaster Series No. 1: California Lager was released in February 2012.

Learn more about Anchor Brewing and our Zymaster Series at www.anchorbrewing.com.

About Anchor Brewing
Anchor Brewing Company’s roots date back to the California gold rush making it one of America’s oldest craft breweries. Its Anchor Steam® Beer is San Francisco’s original since 1896. In 1965, Fritz Maytag acquired and revived the struggling brewery at a time when mass production of beer dominated and seemed unstoppable. Maytag started a revolution in beer that originated today’s craft beer movement. An undisputed icon, Anchor is America’s first craft brewery where beers are handmade in our traditional copper brewhouse from an all-malt mash. At Anchor, we practice the time-honored art of classical brewing, employing state-of-the-art methods to ensure that our beers are always pure and fresh. We
know of no brewery in the world that matches our efforts to combine traditional, natural brewing with such carefully applied, modern methods of sanitation, finishing, packaging and transporting. See what we are brewing today at www.anchorbrewing.com.