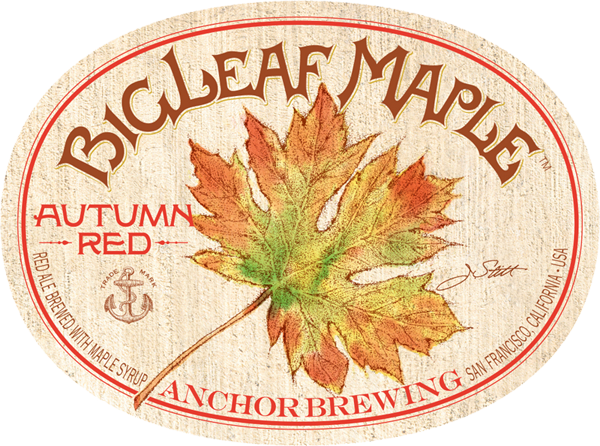 “When we released the beer for the first time last year I was thrilled to see such a positive reaction from Anchor fans,” said Mark Carpenter, Brewmaster at Anchor Brewing. “While I always hate to see summer go, I still happily welcome the transition to fall with this red ale—a perfect autumn brew. The beer’s unique blend of hops, specialty malts and hint of maple syrup makes it a fall classic unlike any other red ale today.”

First released in August 2013, BigLeaf Maple Autumn Red was inspired by a native California tree, its incredible leaves, its delicious syrup, and the colors of fall. The tree, known as Bigleaf Maple, thrives along the banks of California’s mountain streams. Native Californians once made rope and baskets from its bark. Bigleaf Maple sugaring in California dates to the 1800s; yet this tree’s unusually flavorful syrup remains the product of a small group of hobbyists. A hint of maple—including Bigleaf Maple—syrup in every brew perfectly complements the malty complexity, balanced hoppiness, and rich fall hue of BigLeaf Maple Autumn Red.

BigLeaf Maple Autumn Red (6% ABV) is a quaffable, well-balanced red ale with character. Its malty complexity and coppery color come from a combination of two caramel malts, pale malt, and a hint of maple syrup. To complement these flavors, Anchor Brewing uses three additions of Nelson Sauvin hops in the brew kettle and a unique blend of Nelson Sauvin, Citra, and Cascade for dry hopping. The result is a distinctive fall seasonal with extraordinary depth and intriguing aroma.

Since the 1970’s, Anchor Brewing has worked with renowned local Bay Area Artist Jim Stitt to create their beer labels. A distinct, handmade beer deserves a distinct, handmade label and BigLeaf Maple is no exception. In autumn, the bigleaf maple’s huge leaves, up to a foot across, can display a full range of color as they slowly turn from green to gold to red. Capturing this symbolic transition from summer to fall, a watercolor of bigleaf maple’s magnificent leaf is featured on the beer’s label and signed by Jim Stitt himself.

BigLeaf Maple Autumn Red will be available from early August through October in 6-packs, 22-oz bottles and on draught in select bars and restaurants, as well as, at the Anchor Brewing Taproom in San Francisco.

About Anchor Brewing Company
Anchor Brewing Company’s roots date back to the California Gold Rush making it one of America’s oldest breweries. Its Anchor Steam® Beer is San Francisco’s original since 1896. In 1965, Fritz Maytag acquired and revived the struggling brewery at a time when mass production of beer dominated and seemed unstoppable. Maytag started a revolution in beer that originated today’s craft beer movement. An undisputed icon, Anchor is America’s first craft brewery where beers are handmade in our traditional copper brewhouse from an all-malt mash. At Anchor, we practice the time-honored art of classical brewing, employing state-of-the-art methods to ensure that our beers are always pure and fresh. We know of no brewery in the world that matches our efforts to combine traditional, natural brewing with such carefully applied, modern methods of sanitation, finishing, packaging and transporting.