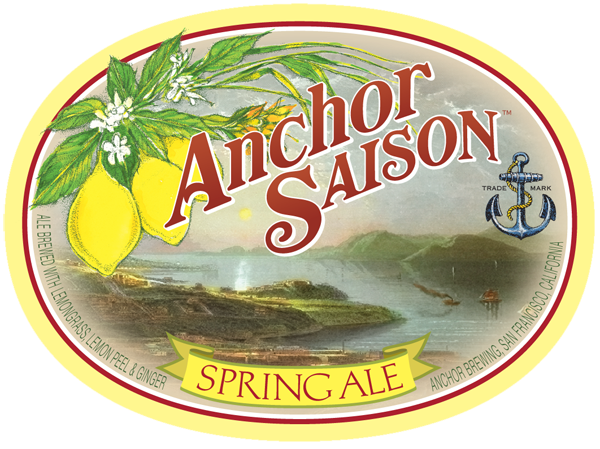 Anchor Saison™ Spring Ale was first released in California in March 2014. Due to the success of the beer’s limited release, Anchor Saison will now be available nationwide this spring.

“When developing the recipe for Anchor Saison, I wanted to create a beer that would transport the drinker to a rural springtime setting in Belgium while staying true to Anchor’s California roots, “ said Mark Carpenter, Brewmaster at Anchor Brewing. “We accomplished this by using locally cultured saison-style yeast and adding lemongrass, lemon peel, and ginger to put our own twist on this classic beer style. We like to add an element of surprise to many of our beers and we think Anchor fans will be delighted with the refreshing herbal and citrus flavors of Anchor Saison as they welcome the transition from winter to spring.”

Inspired by the saison style that originated from the rustic farmhouse ales of Wallonia, Belgium, Anchor Saison (7.2% ABV) is a traditional Belgian-style saison with a California twist. The distinctiveness of roasted Belgian wheat malt is enhanced by the peppery, clove-like flavors of locally cultured saison-style yeast. And, for this release, Anchor chose three California ingredients—lemongrass, lemon peel, and ginger—whose synergy adds a tangy crispness and herbal spiciness to this sharply refreshing, uniquely Californian saison.

The Anchor Saison label was inspired by the imaginative and colorful beer and fruit-crate labels from the late 1800’s depicting California scenery framed by mouth-watering images of fresh citrus. Anchor’s label features an original, hand-colored 1873 lithograph of the Golden Gate as seen from Telegraph Hill in San Francisco. The label’s California ingredients—hand-drawn by local label artist James Stitt—adorn it, creating a uniquely Anchor label for a uniquely Anchor brew.

Anchor Saison Spring Ale will be available nationwide in 6-packs and on draught at select retailers and at the Anchor Brewing Taproom in San Francisco starting in March 2015.

Learn more about this seasonal brew by watching our Anchor Saison Video.