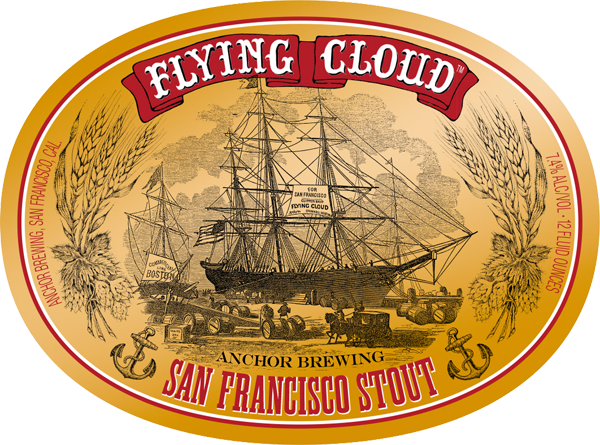 “Flying Cloud was originally brewed as part of Anchor’s Zymaster series. The beer instantly became a favorite among Anchor fans, as well as the brewers here,” said Mark Carpenter, Brewmaster at Anchor Brewing. “We used flaked barley and Maris Otter malt to create a smooth mouth-feel that sets a perfect background for the beer’s dark roasted flavor. It finishes slightly sweet but is balanced with just enough lingering spicy hop flavor. This tasty stout pairs well with rich meat dishes like a slow-roasted lamb shank. However one chooses to enjoy Flying Cloud though, we know they will be pleased by this delicious, dark Dublin-style brew.”

The average clipper took 125 days to sail from New York to San Francisco. But not Flying Cloud, which, in 1851, made the trip in 89 days, 21 hours anchor to anchor. No other ship sailed it faster until 1989. With its “extreme” design, its captain Josiah Creesy, and his wife/navigator Eleanor, the Flying Cloud is the ideal symbol for this distinctively delicious brew.

Flying Cloud San Francisco Stout first arrived on the market in January 2013 as the third release in Anchor’s Zymaster series, an experimental series that features innovative techniques and unusual flavors with every release. Due to popular demand, Flying Cloud San Francisco Stout will be released for a limited time in 4-packs as the first beer in Anchor’s Argonaut Collection.

The Anchor Argonaut Collection marks the first time since 1971 that Anchor has released an Anchor beer in a 4-pack. To honor the spirit of adventure, The Argonaut Collection will showcase adventurous new brews for a limited time, starting with the release of Flying Cloud San Francisco Stout.