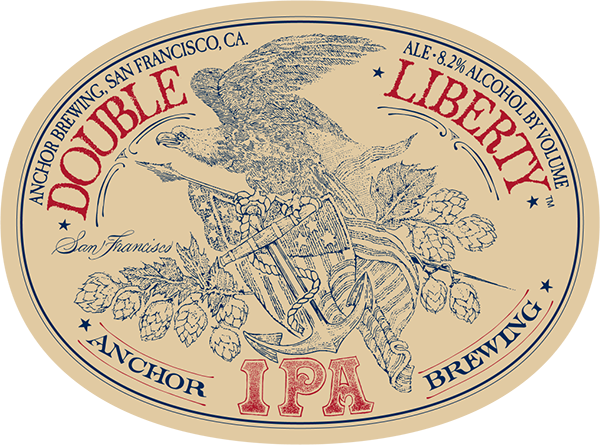 “When people first tried our classic Liberty Ale in 1975, its strong hop flavor was a shock and delight to their palate. Liberty Ale truly broke the mold, starting a trend towards hoppy beers that continues today as beer fans increasingly enjoy hop-forward IPAs,” said Anchor Brewmaster Mark Carpenter. “40 years ago Liberty Ale was the hoppiest beer on the market by far, which is not the case today. I like to make the joke that when we wrote the recipe we should have built in an inflation factor for the hops! Double Liberty IPA will more than satisfy the hop-heads, though. With double the hops and double the IBUs, it has a real kick. It’s an exciting and unique venture from our other core beers, making it an ideal addition to our adventurous collection of Argonaut beers.”

During the California Gold Rush, the ancient word Argonaut was reimagined to include those hardy pioneers who journeyed westward by ship or prairie schooner in search of adventure, fortune, and a new life. In the spirit of the timeless quests made by these legends, America’s first craft brewery is proud to launch a limited edition of uniquely Anchor brews, the Anchor Argonaut Collection. Available in a 4-pack and on draught, Double Liberty IPA (8.2% ABV) is the latest addition to be offered under the Anchor Argonaut Collection, following the release of Flying Cloud Stout™, which hit shelves in March 2015.

Double Liberty IPA will be available nationwide in 4-packs and on draught for a limited time starting June 2015 as well as on tap at the Anchor Brewing Taproom and the Anchor Beer Garden at The Yard in San Francisco. Find a brew near you using the Anchor Beer Finder.

The Anchor Argonaut Collection marks the first time since 1971 that Anchor has released an Anchor beer in a 4-pack. To honor the spirit of adventure, The Argonaut Collection will showcase adventurous new brews for a limited time, starting with the release of Flying Cloud San Francisco Stout™ followed by Double Liberty IPA®.