Anchor Brewing Announces the Return of the California Craft-Pack, A Mix of New and Classic Canned Craft Beers 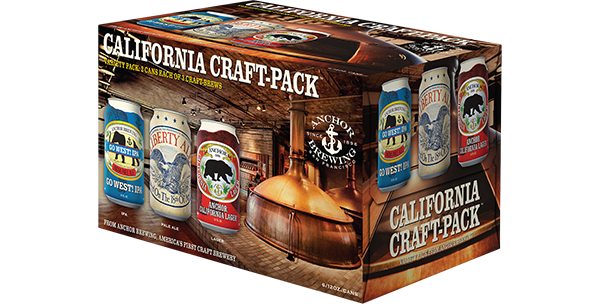 Designed for beer fans to sample three legendary brews from America’s first craft brewery, the California Craft-Pack brings Anchor favorites together in one convenient offering. The California Craft-Pack first appeared on the market in limited quantities in the summer of 2015, and returns now in time with the national release of Go West! IPA, an adventurous new IPA inspired by the California Gold Rush and all those who Go West! A nod to the beloved past and present brews from America’s first craft brewery, the variety pack is perfect for entertaining or hosting a fun beer tasting among friends.

“When we created the California Craft-Pack, we wanted to create something that gave consumers a true taste of the past, present, and future of Anchor,” said Anchor Brewmaster Scott Ungermann. “We decided to include Liberty Ale, the first modern American IPA, and California Lager, a re-creation of the first lager brewed in California. Each beer is a nod to our brewing roots. With the addition of Go West! IPA, our newest release, we’re toasting to the future of IPAs. Brewed using an all-new dry-hopping technique, Go West! IPA is an adventurous, hop-forward beer. Together, these three beers make an exceptional mixed collection that is perfect for a shared or solo tasting.”