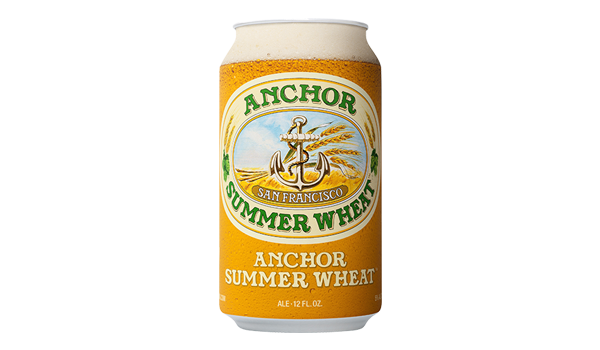 “For the summer months we brew a beer that pairs perfectly with our favorite outdoor activities, whether it’s grilling, hiking, or soaking up rays at the park,” said Anchor Brewmaster Scott Ungermann. “The brew’s crisp, clean flavors unite to create an excellent summer thirst quencher. We blend 2-row pale malt and malted wheat and filter the beer to maintain its light, refreshing flavor. The whole-cone hops used in the kettle and dry-hopping process give this beer a slight bitterness complimented by wonderful hoppy aromas of citrus and pine. This beer is crisp and cool as a San Francisco summer.”

Back by popular demand, Anchor Summer Wheat (4.5% ABV) is an all-malt beer, with over 50% of its malt derived from malted wheat. It is fermented with a traditional top-fermenting “ale” yeast, yielding a clean, balanced flavor that highlights the refreshingly light flavor of malted wheat. The head is unusually abundant due to the natural protein deposits of wheat, with a thick consistency similar to meringue. For beer lovers, Anchor Summer Wheat is a lighter brew that doesn’t sacrifice tradition or character.

Anchor Summer Wheat is available nationwide May through July in six-packs of 12 oz. cans and on draught in select bars, restaurants, and stores including the Anchor Brewing Taproom and Anchor Brewing Beer Garden at The Yard in San Francisco. Find a brew near you using the Anchor Beer Finder.