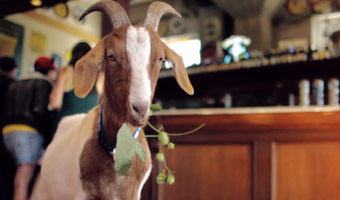 Bock beers are believed to have originated in the town of Einbeck, Germany. Einbeck is pronounced Ein-BOCK, and “bock” in German can be translated to mean “billy goat.” As a result, a goat is traditionally featured on the label of bock beers. Anchor Bock®, with its dark, satiny texture and rich hints of chocolate, caramel, and roasted barley, carries on the traditions of releasing a bock beer in the spring, and of featuring a goat on the label. Anchor Bock® is a traditional celebration of spring with a modern kick!