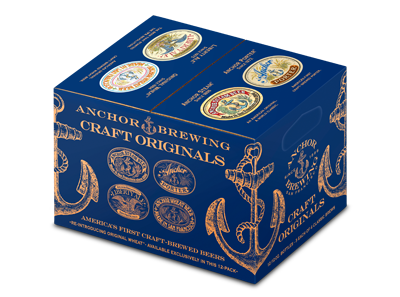 Three additional best-selling beers complete the collection. Anchor Porter (5.6% ABV) is the definitive brew that became the first modern American porter when it was introduced in 1972. Those who look beyond its intimidating color discover its surprisingly smooth, full-bodied drinkability.

The beer that started the IPA revolution, Liberty Ale (5.9% ABV) was introduced in 1975, well before it was fashionable to call a craft-brewed, hop-forward pale ale an IPA. Liberty’s introduction of the Cascade hop and the revival of the dry hopping technique revolutionized American brewing.

The first of a new generation of wheat beers in the US, Original Wheat (5.6%) was introduced in 1984. Exclusively available in the Anchor Craft Originals Pack, this unique re-creation celebrates the rebirth of wheat beer in America.

“I joined Anchor as one of five employees in 1971 at a time when there were no other craft breweries,” said Mark Carpenter, brewmaster of Anchor Brewing. “Mass-produced beers dominated American brewing and the hands-on art of brewing was being lost every day. Our focus on classical brewing and long-forgotten beer styles resulted in truly unique, radically different, craft-brewed beers. When we started, we didn’t know our beers would inspire brewers and beer lovers alike. Here at Anchor, we take pride in our series of firsts and the introduction of the Anchor Originals Pack is a one-of-a-kind, a collection of America’s first craft-brewed beers. Most people remember the first time they had an Anchor and we hope this offering will inspire a new generation of beer-lovers.”

Each 12-pack includes the Anchor Craft Originals Educational and Tasting Notes Sheet. Created to help the craft beer enthusiast understand the historical significance of these brews as well as an interactive tasting notes sheet to record each beer's aroma, color and taste.

The Anchor Craft Originals 12-pack will be available beginning September 2013 in select retailers nationwide and at the Anchor Brewing taproom in San Francisco.