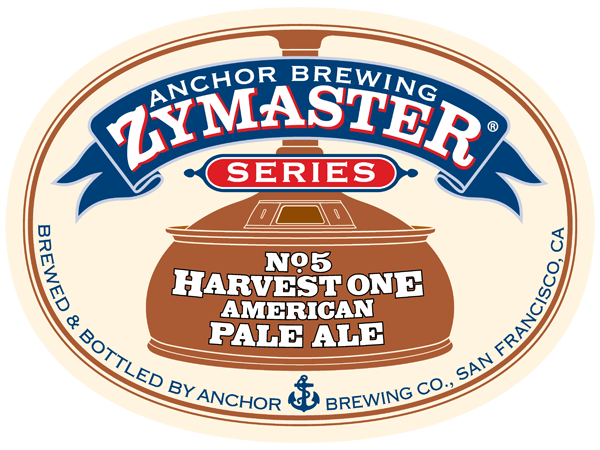 It’s hard to imagine that the Cascade hop, today one of craft brewing’s most popular hop varieties, was ever new. Yet this distinctively aromatic hop, developed in Oregon by the USDA’s breeding program, was first released in the early 1970s. In 1975, Anchor Brewing featured Cascade hops with the debut of Liberty Ale®, America’s first craft-brewed, dry-hopped ale. Anchor Brewing has been using it in Liberty Ale® ever since.

Over the years, Anchor Brewing has experimented with many different hops—both old and new—from around the world. For Zymaster Series No. 5: Harvest One American Pale Ale, Anchor Brewing decided to feature an experimental new hop variety. This yet unnamed, pre-commercial, aroma hop provides a uniquely Anchor twist to Zymaster 5.

Zymaster Series No. 5 (7.2% ABV) is made with a special blend of pale, caramel, and Munich malts, which contribute a distinctively complex maltiness and deep golden color. Nugget hops give it a tangy bitterness. But the hallmark of Zymaster 5: Harvest One American Pale Ale is the intriguingly novel aroma of an experimental new hop, which was used liberally in both the brewhouse and the cellar. A late addition to the boil plus dry hopping provides Harvest One with an incredibly lively hop aroma reminiscent of tree-ripened peaches, with just a hint of fresh melon. The result is a uniquely exciting new beer unlike anything brewed or tasted before.

“We have a fantastic and long-lasting relationship with the hop growers we work with.” Said Mark Carpenter, Brewmaster at Anchor Brewing. “When we had the opportunity to sample and test a small set of experimental hops that we’re being grown; we were excited at the opportunity to work with something new and different. Out of about a dozen or so samples, there was one that really stood out to us. Right away, we knew this was a new hop variety we wanted to brew on a large scale. We were after something unique and aromatic, and this hop was one we hadn’t seen or smelled before and would fit well in our Zymaster Series. Similar to how Anchor introduced the world to the Cascade hop in 1975 with Liberty Ale, we are proud and excited to share our take on this new, experimental hop in this new American craft beer.”

Beginning on October 14, 2013, Zymaster Series No. 5: Harvest One American Pale Ale will be available in select California markets in 22-ounce bottles and on draught, as well at the Anchor Brewing taproom in San Francisco. In the coming months this release will be available nationally.