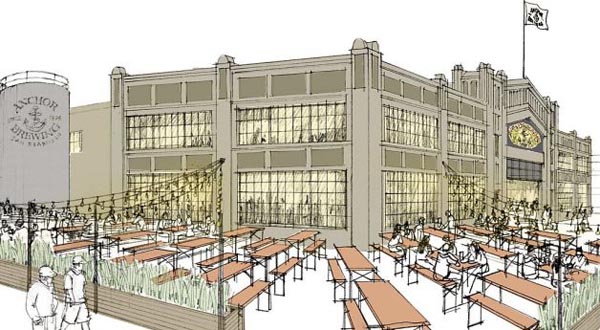 Anchor will continue to operate its facility in Potrero Hill, but will greatly expand its operations with the development of the Pier 48 facility. The two facilities will allow the historic American brewery to quadruple its annual production capacity from 180,000 barrels to 680,000 barrels.

“Anchor Steam® Beer is a San Francisco original since 1896 and Anchor Brewing has already called six San Francisco locations home during its rich history,” said Keith Greggor, Co-owner and CEO of Anchor Brewers & Distillers. “It is believed that “Anchor” was chosen as the brewery name for its indirect, but powerful allusion to the booming Port of San Francisco. We’re excited to bring Anchor to our first waterfront home at Pier 48.”

Pier 48, the southern-most structure of the Port’s Embarcadero Historic District, will be fully rehabilitated and re-established as an industrial hub of the central waterfront. The new Anchor facility will feature production facilities for brewing, distilling, packaging, storing, and shipping; a restaurant, museum and educational facility in the headhouse of Pier 48; and a restored walkway around the entire pier apron that will connect pedestrians to the Portwalk and allow views into the Anchor brewhouse. Anchor will offer tours of the facilities and educational seminars with a focus on the history of craft beer, the art of craft distilling and Anchor’s history in San Francisco. The construction project beginning late 2014 will feature the use of green and sustainable materials, setting the standard for a modern urban brewery.

The Anchor expansion will create approximately 200 new jobs, 75% of which are production-oriented positions that employ a diverse work force.

“We are making things in San Francisco and creating a magnet for jobs for thousands of people from every background in our thriving local manufacturing sector,” said Mayor Ed Lee. “Making sure our homegrown companies stay and grow right here in San Francisco remains my top priority and I want to thank Anchor Brewing and the San Francisco Giants for driving the engine of economic growth, bringing jobs and revitalizing our world class waterfront.”

The Anchor Brewery expansion project also represents the first major tenant of the Mission Rock Project – a new, mixed use urban neighborhood currently being developed by the San Francisco Giants. The Anchor Brewing facility will cover 22% of the overall project site.

“As a longtime partner of the Giants, we are delighted to welcome Anchor Brewing to the waterfront and to partner with them on what will become an exciting place for San Franciscans to live, work and play,” said Larry Baer, Giants President and CEO. “Given the rich history of the Giants and Anchor Brewing in San Francisco, it is only fitting that we work together to help transform this historic part of the City’s waterfront.”

In addition to Anchor Brewing’s new facility, the Mission Rock Project will include more than eight acres of parks and open space, 650-1,500 residential units, 1-1.7 million square feet office space, parking structure to serve ballpark and Mission Rock patrons, and up to 250,000 square feet of retail, restaurants, and public amenities. In total, Mission Rock is expected to create 4,800 construction jobs and 6,400 permanent jobs.

The Mission Rock Project is one of several development projects on Port Property. The Port of San Francisco, which will celebrate its 150th anniversary in April, is currently implementing a long range master plan which focuses on expanded maritime use and increasing public access to the City’s historic waterfront. About Anchor Brewing
Anchor Brewing Company’s roots date back to the California Gold Rush making it one of America’s oldest craft breweries. Its Anchor Steam® Beer is San Francisco’s original since 1896. In 1965, Fritz Maytag acquired and revived the struggling brewery at a time when mass production of beer dominated and seemed unstoppable. Maytag started a revolution in beer that originated today’s craft beer movement. An undisputed icon, Anchor is America’s first craft brewery where beers are handmade in our traditional copper brewhouse from an all-malt mash. At Anchor, we practice the time-honored art of classical brewing, employing state-of-the-art methods to ensure that our beers are always pure and fresh. We know of no brewery in the world that matches our efforts to combine traditional, natural brewing with such carefully applied, modern methods of sanitation, finishing, packaging and transporting. See what we are brewing today at www.anchorbrewing.com.